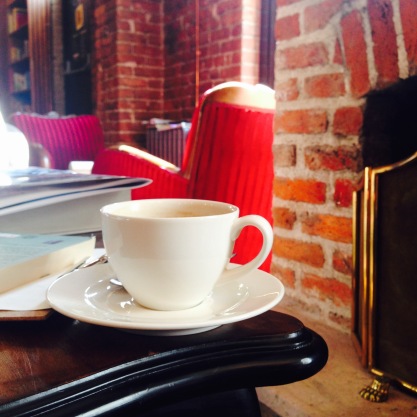 If you must drink Turkish coffee, make an effort to never do so alone. The motor-oil substitute and national past-time fares somewhere between an unfiltered shot of espresso and a methamphetamine. My dad likes to remark that a strong cup of coffee will “put hair on your chest.” And such a theory fairs well in a society lacking neither strong brew nor signs of traditional masculinity.   But there is much more to Turkish coffee and indeed to the Turkish language than the beans from which it comes.

Western visitors often delight in Turkish café culture. And by all means, Turkey is a nation of small tables and infinite cups of coffee, tea, and other people’s business.

Coffee houses around the city are packed to the brim with old men smoking cigarettes, playing backgammon, and, discerning from my poor translation skills, complaining about their spouses. Coffee house culture permeates the cool, upwardly mobile youth of the downtown areas as well. Karaköy and Sishane are full of similarly cigarette imbibing youth talking about all manner of things. Conversations range from international affairs, to weddings, sex, the minimum wage, upcoming elections and everything in between.

Indeed, Turkey is a nation of incurable gossips. But for a society ostensibly concerned with privacy, religious distance, and quiet personal lives, the obsession with each other’s business seems unique. The key to understanding this disposition, I believe, is in the language itself.

English sentences tend to start with a subject and an action followed by the time, place, and extraneous details: as in “I went to the store the other day.” Turkish is the precise opposite. Turkish sentences start with the time, place, and supporting details followed only then by the subject and verb: “yesterday the store to went I.” More important than the subject is the what actually happened and where of a tale. Turkish is a language concerned not just with the details of a story but how those details were acquired.

Often called the gossip tense, this conjugation is used to describe things that have happened, but not explicitly seen. It is used in everyday speech as in, “this bread has gone stale [but I did not literally sit here and watch it go stale].” The gossip tense can be used to convey action as in “Colin was here [but I did not see him leave].” But most importantly, these tenses are put to good, if not exhausting use in a coffee shop.   One can just imagine all of the “did you hear abouts…” whipping through the hushed air.

One can look back to the arrival of coffee in Istanbul from Ethiopia and discern that the creation of coffee shop culture might have led to the creation of a gossip tense. (Asking whether the tense came before the cultural appetite is a bit like asking whether the chicken came before the egg.) Indeed, coffee’s arrival raised eyebrows even in the Sultan’s palace. Coffee was thought to be so dangerous (i.e. enlightening and addictive) that the Sultan banned it entirely at first. Surely nothing good can come from hapless conversations about politics and society. The forcible closure of coffee shops ended not long after the Sultan himself tried a cup of Turkish motor oil. History and coffee go hand in hand in Istanbul.

Traditional courtship requires that a suitor visit the home of his potential parents-in-law. The daughter in question (if a daughter can ever be “in question”) would be tasked with preparing coffee for the guests. If she liked the young man she might add a little extra sugar to his coffee. And if she didn’t find him so appealing, perhaps a little salt will do. The truly resilient man takes his salt coffee in stride and grace. Wikipedia even has it that the trickier Turkish girls (which seems redundant to me) would intentionally salt the coffee of a suitor to measure his temperament and patience. Turkish coffee culture determines not just what is said, but what isn’t. Nothing says pursuing a Turkish girl like quietly grinning through cups of salted coffee.

Gone are the days of Turkish coffee as a right of courtship or the bane of kings. But coffee culture still defines much of Turkish communication. Not just literally. (For example, the Turkish word for the color brown is kahverengi, literally meaning “coffee colored.”) But also in how coffee culture provides the arena for political and social discussion. Facebook and Twitter have nothing on a culture in love with ear-to-mouth gossip and the “who-done-whats” of life. The Turkish language is not learned in classrooms. It is learned in coffee shops.